For Halloween 2019, I designed and built this Minecraft jack-o’-lantern equipped with a Raspberry Pi to play music, control an RGB LED block, and respond to proximity with flashing lights and sound effects.

This was a quick free-time project that involved 3D design and printing, electronics, and Python scripting. (Side-objective: promoting my young son’s interest in all of the above.)

A few weeks ago, I ran across this Minecraft Jack-O’-Lantern model and thought that I’d print one for my (older) son, who’s four years old and enjoys Halloween, Minecraft, and 3D-printed stuff.

I scaled up the model a little (using Tinkercad) and then printed it (on a Prusa i3 MK3 printer with Hatchbox PLA filament, using Simplify3D to slice and OctoPrint for control)… 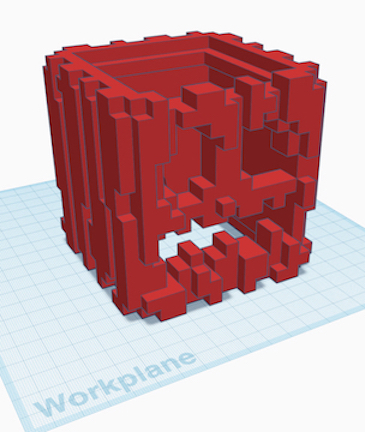 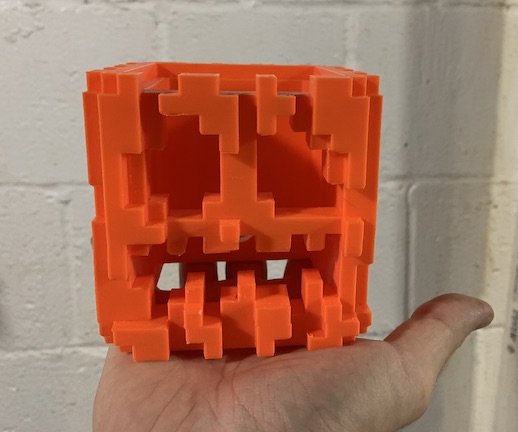 It turned out pretty cute, but the empty space inside caught my attention. The Minecraft jack-o’-lantern glows yellow – maybe an RGB LED would make it more interesting?

I took some measurements and concluded that the interior was too small for anything like a Hue RGB bulb. I thought about scaling it up some more – I’ve printed some large models before, but how about (almost) an entire spool of filament? So I scaled up by 85%, requiring 400m / 1kg of 1.75mm PLA and printing for 36 hours on the fastest setting… 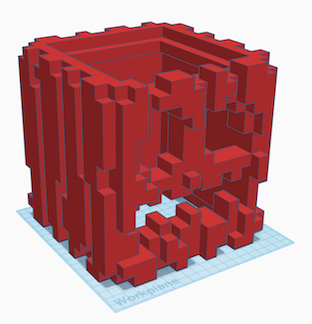 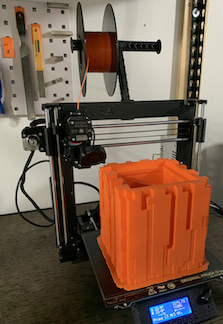 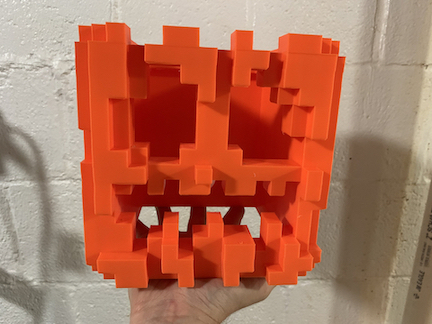 Now I have plenty of room inside. What else could I do with it? A Raspberry Pi should fit pretty easily. I could easily throw in some speakers and play music, like the Minecraft Halloween tracks. Could I also make it control the light? Maybe change color?

I had completed some classes this year in microprocessors and sensors, and some of the lab experiments involved the HC-SR04 range finder. A plan started to come together….

Here’s the schematic (generated with Fritzing):

Next was the software base:

For reference, here is my install guide. (I keep a file like this for each Raspberry Pi project that I undertake in order to document the configuration in a centralized and human-readable way. It’s helpful for debugging this project and as a reference for other projects.)

Part testing was improved by teaching my son what each of these parts can do. He’s still a little fuzzy on the details, but was excited to see each new piece of the puzzle.

The Python code to control the individual components was integrated into a script to run the process: playing music, periodically flickering the LED cube, and watching the input through the range finder. When the range finder indicates a nearby object, the script pauses the music, plays a random sound effect, flashes the LED cube red until the sound effect ends, and then resumes the music and returns to normal. Quite simple. Here is the script.

I wired up the microcontroller to the components by making a molex cable. Not the neatest cable, but it did the job.

…but the results were nice. The height of the bottom compartment is 50mm – more than I’d planned, and not quite as unobtrusive as I’d hoped – but when printed in brown, it looks fine. 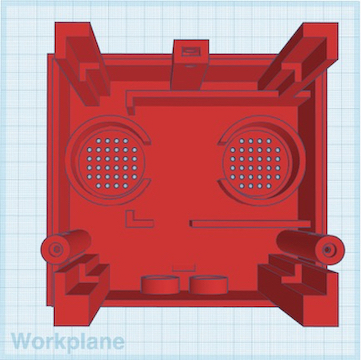 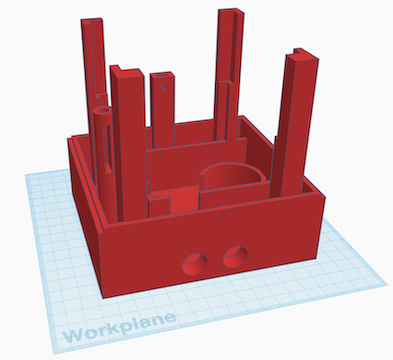 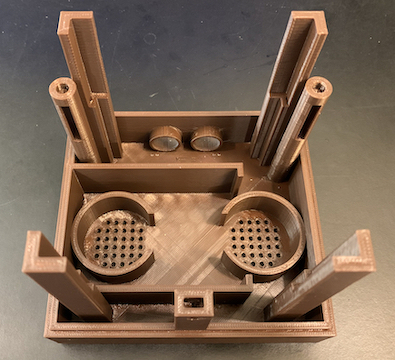 Now for component integration. I used some wire nuts for the IR LEDs just so that I could uncouple them if necessary. 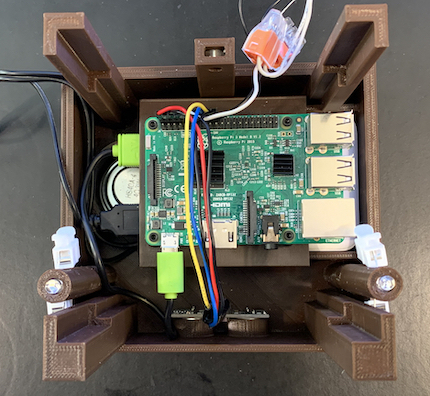 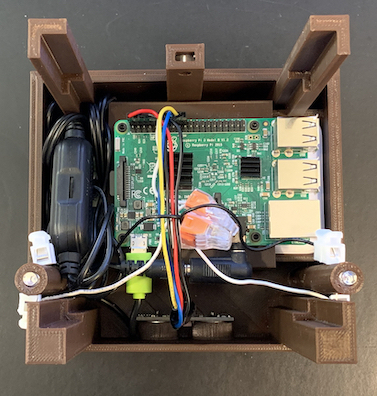 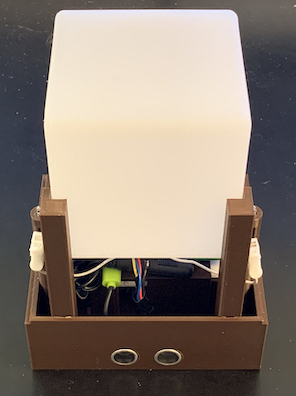 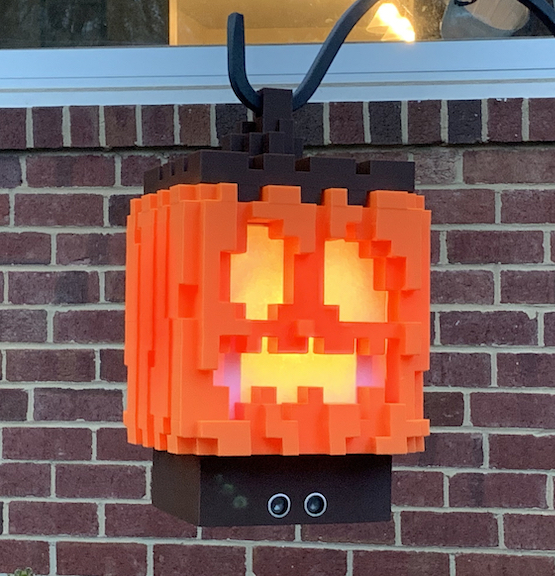 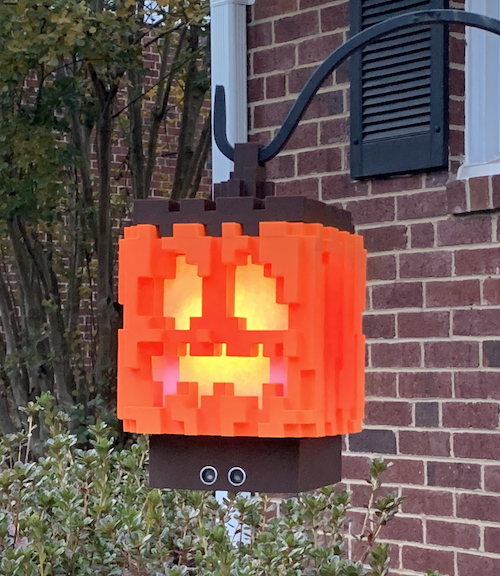 Making a note here: Huge success! We hung it outside and it glowed, flickered, and made spooky noises throughout the trick-or-treating period. (It was also connected to our WiFi, and I found it amusing to ssh into our Minecraft jack-o-lantern to adjust the ranges.)

At the end of the evening, my son looked up and me and said, “Thank you for printing my pumpkin.” I’ll take that as a win.